With the increase in awareness against the use of plastic, several manufacturers have moved towards more environmentally friendly alternatives such as bioplastic and biodegradable plastic. Some plastic manufacturers, on the other hand, have started investing in “recyclable plastic”; a variation of plastic that, by definition, can be recycled into other products.

Difference between recyclable and non-recyclable plastic 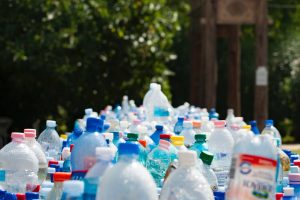 Before we move to explain the different plastic recycling numbers, the first thing to do is understand the generic difference between recyclable and non-recyclable plastic. Non-recyclable plastic, although having the same material base, are not as structurally stable to run through the recyclable process as other forms of plastic. An example is plastic wrapping or films; these are not only difficult to recycle but also risk damaging the machinery if they get clogged somewhere in between due to their lightweight, flexible structure.

Larger, heavier plastic items, such as liquid containers and boxes are much more rigid and economical products to recycle, therefore are usually made from structurally strong plastic that can be recycled into other products. As we can clearly see here, the primary factor that differentiates recyclable plastic from non-recyclable plastic is the structure of the plastic itself. We will be discussing other factors that make plastic recyclable or non-recyclable as we move to the different types in this article, so read on!

The first plastic recycling symbol in our list is Polyethylene Terephthalate, also known as PET or PETE plastic. This type of plastic is the most common of all on the list and is famous for being used for a variety of household items such as ketchup, food beverages, peanut butter, and even mouthwash bottles.

Another reason for the popularity of PET is that it is very inexpensive, as well as its ability to hold liquids for long periods without leaching. PET is considered recyclable, but despite the high demand, it is only recycled about 20 percent of the time. Want to know whether your plastic container is made from PET? Check the bottom of your beverage or ketchup bottle for the “1” sign enclosed within circular arrows.

The second in the list of plastic recycling numbers is High-Density Polyethylene or HDPE for short. This is a very common plastic used all over the world, especially in the United States. Known for being strong yet lightweight, it is used as a container for a number of products available in large quantities such as milk, cleaning liquids, and detergent liquids.

HDPE is also a recyclable plastic that can be easily made into more durable items such as tables, pens, and fences. HDPE can be recognized from its color, being a slightly translucent material, but just to be sure, you should always double-check for the “2” number at the bottom or side of the container.

Polyvinyl Chloride or PVC is another commonly used plastic, often found in piping, medical equipment, gloves, and even food wrapping materials. This is because PVC is extremely durable and lasts for much longer periods than other forms of plastic. It is often recognized with the plastic recycling number “3”, and is one of the types of plastics that are not considered safe for recycling.

PVC is a type of plastic that, if incinerated, produces a huge amount of hazardous gases, many of which are deadly. However, there are some recycling plants that are able to dispose of PVC properly, but they too, are rare. That being said, PVC is a long-lasting material and is used in piping and medical equipment that usually last several years, it’s barely going to need any recycling at all!

The next one on our list is Low-Density Polyethylene or LDPE. This type of plastic is known for creating very lightweight flexible products, such as shopping bags, garbage bags, squeezable bottles, and lightweight furniture. LDPE is also one of the biggest pollutants in the oceans, with thousands of fish and mammals dying after ingesting these fatal plastic products.

Unfortunately, to make matters worse LDPE cannot even be recycled as they run the risk of causing damage to the recycling machinery by choking or clogging the system. Companies have therefore looked towards biodegradable materials that can be used to replace LDPE and lower their impact on the environment.

Since garbage bags are one of the most common products made from LDPE, a new line of specially designed biodegradable trash bags has emerged, offering the same durability but at a lower carbon footprint. These bags are popular among customers in the US and offer a promising way of addressing the LDPE problem. LDPE plastic is rarely marked, so if you are carrying a flexible plastic material with no number on it, assume it is Type 4. 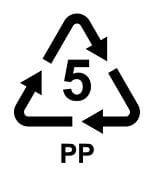 The fifth one in our list of plastic recycling numbers is Polypropylene, also known as PP. Although not as commonly found as PET, this type of plastic is also often used for making ketchup or medicine bottles, and popular for making caps of such containers. One property that helps PP become a good option for manufacturers is its ability to withstand higher temperatures without leaching, which also increases its usage when recycled.

Recycled PP has a number of applications, and can be used for products often associated with higher temperatures such as car battery cases and signal lights. PP, unlike LDPE, are often marked, identified by the number “5”.

Polystyrene, or PS, is a well-known product identified by its foamy structure and usage in packaging for various electronics and decorations and is identified by the number “6” often engraved in the foam itself. Known for hosting some of the most toxic chemicals in the plastic industry,  it is ironically popular as a takeout container in restaurants. Although many countries have severely restricted the use of polystyrene, it is still a big problem in the third world, and being virtually unrecyclable it remains one of the most widespread pollutants on Earth.

Polystyrene is known for often leaching into substances such as food, especially at higher temperatures. So if you see any plates or cups made from polystyrene, stay away! In the past decade, companies have started investing in alternatives to polystyrene to create safer containers for food. Today, there are several materials that are accepted as an alternative container for food to polystyrene. Here is a list of the most popular materials used for making sustainable to-go containers in restaurants.

Concluding our list of plastic recycling numbers, we have the final type of plastic that contains all substances that do not follow the structures of the preceding types. This category is everchanging since even bioplastics (such as PLA) are considered to fall into this category, though they aren’t technically made from petroleum!

These plastics are often used to make large water bottles, electronic cases, and nylon. Since this is the miscellaneous category, we can’t really say whether the plastic can be recycled or not. Either way, you should look to recycle the plastic that looks rigid enough, since it has a higher possibility of being recycled than flexible, soft plastics.

All you need to know about eco friendly food scrap bags

All you need to know about eco friendly food scrap bags

Please log in again. The login page will open in a new tab. After logging in you can close it and return to this page.